A knife gate valve is a component that utilizes a blade to cut through clogging of heavy liquids. These valves were designed to work in some of the most corrosive, erosive and abrasive environments in the world. 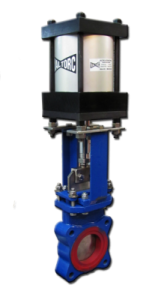 How a Knife Gate Valve Works
Because of this highly effective design characteristics, knife gate valves have become invaluable when it comes to applications that involve viscous fluids, slurry and other systems where impingement is an issue.

Knife gate valves are used is a lot of processing plants today and come in large sizes which make it easier to handle thick flows of light grease, heavy oils, varnish, slurry, waste water and paper pulp. It's important to note that these valves do have low-pressure limitations and are designed to seat the blade into an elastomer seal once the blade cuts through the substances its handling. Thick liquids easily glide over these soft seals with no interference, however, when a solid mass or powder passes through the knife gate, the bulky, dry material ends up packing into the soft seals located at the end of the gate. When this happens, the seals eventually won’t close tightly enough. If this happens the seals will need to be replace.

When not to Use Knife Gate Valves
These valves shouldn't be used to regulate flow because whenever fluid is forced against a partially closed gate, a vibration takes place, gradually eroding the disk and seat. Consequently, knife gate valves should only be used completely closed or opened. In addition, these valves are designed to slowly open and close to safeguard against the impacts of water hammer.

The most significant benefits of knife gate valves are the weight (16" usually less than 300#) and the cost. ANSI gate valves are usually over 1200# and they more expensive.